Few people are as old-fashioned as old men.

I was flying across the country to give a talk. Unfortunately, it wasn’t really anywhere that I could fly direct to, and thus I was stuck with a connecting flight on the way there and on the way back (and I was flying in and out on the same day).

Now, I’m normally a person who loves flying. I can fall asleep sitting in the middle seat between two rather large people occupying my armrests. I joke that the engines can rock me to sleep. I can nap through turbulence, babies crying, and bratty children kicking my seat for hours.

That day was just not my day.

I went to get my seat for my first flight, where I discovered that I was next to an older gentleman.

Now, don’t get me wrong. I love little old men. They remind me of my grandfather and my great-uncle and I just can’t help but want to have them tell me stories and hope they’ll treat me like their granddaughter for the foreseeable future (I was a daddy’s and a grampa’s girl, after all). I can listen to old war stories for hours, cry with them as they remember meeting their wives, and rejoice in hearing of first becoming a grandparent.

Yes, I do realize that it’s like I’m an old person already. But that’s besides the point for this encounter.

Older Guy (noticing my work bag): So you’re in medicine?

Me: Yup, I’ll be a doctor next Spring. I’m in med school now.

Older Guy: You do realize that you won’t be a success in life until you have a ring on your finger.

I politely declined further conversation for the rest of my flight. And on to flight #2…with another older guy next to me.

Older Gentleman #2: You’re a doctor? And you’re not married? Is there something wrong with you or something?

Again, I made the wise decision to decline further conversation. Then I gave my talk, boarded ANOTHER plane, and again found myself sitting next to an older gent…

Old Guy #3: In my day, women didn’t work, they got married. You’re going to be a horrible mother if some guy ever wants to married you.

This really was old after the first flight. But the hits just kept coming with my fourth and final flight of the day.

And another, final, old man was awaiting me.

Old Gent #4: You do realize that no matter how successful you might be, you’re always going to be a failure until you’re married, right?

Obviously, I need to sit next to grandmothers on planes instead.

Put a Ring on It Stuffed Cornish Hens 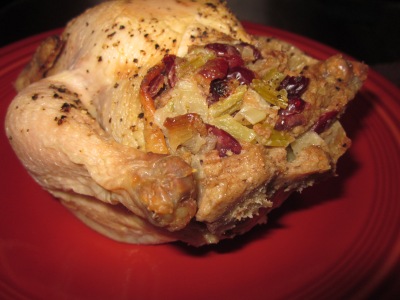 in case I need to offer more than the doctor card