As a kid, you always have dreams. It takes acknowledging those dreams in front of others to make you realize that they might not be the wisest idea.

My elementary and middle school years were filled with boy bands and girl bands. From New Kids on the Block, to Spice Girls, to Backstreet Boys, I’m pretty sure that my best friend and I bought nearly every CD the day it was released and wore them out listening on repeat.

That also meant that we felt we could create our own girl band. (And yes, I realize that two people forms just a duo, but we weren’t quibbling with the details here, folks.) We spent hours writing our own songs, designing our album cover art, and recording our music using a pair of drumsticks we found to keep the beat.

Naturally, we needed a place to first showcase our talent. Which happened to be the neighborhood block party.

We announced that year that we’d be hosting a talent show. We might have been the only people to sign up for the talent show, but that’s a different story. Decisions were made to submit two pieces- we’d demonstrate our dancing skills to a choreographed rendition of Backstreet Boy’s “Everybody [Backstreet’s Back]” and show off our chops singing a song we wrote ourselves.

Then, on the day of the block party, my friend wisely made the decision to drop out of the singing portion. I chose to go it alone.

I should probably take this moment to say that I am not the strongest dancer (future stories to follow). Nor is my singing voice the best when I’ve been running around screaming at a block party the entire day. And then there was the rather unfortunate fact that our song didn’t make the any sense, and would not sound good even if Adele sang it, much less two pre-teen girls going through puberty.

We danced. I nearly fell. I sang. My voice kept giving out.

The polite clapping I heard after the performance let me know that I should probably come up with another career choice.

Anyone Can Do It Fruit Salsa 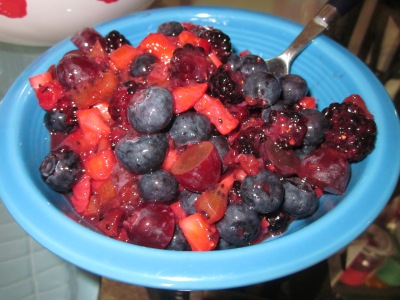 you don’t even need talent to make this

Ingredients (feel free to use whatever fruit you have on hand- this is just what I like in mine!)