Revenge doesn’t always turn out the way you want it to.

Back in high school, once of my longtime guy friends (we’re talking friends since kindergarten sort of thing) decided that we were meant to be together and asked me to be his girlfriend (yup, we jumped straight to that without even a first date).

I turned him down because I didn’t want to ruin the friendship (and I wasn’t interested in him in that way). Therefore, he decided to “get revenge” by asking one of my “friends” to an upcoming high school dance.

To start, I actually wasn’t friends with this girl. We hung out in the same group of friends, but personally I found her rather annoying. Victory #1 for me, with more to follow.

They both bragged the entire month about how they were going to the dance together. And then, the fateful day arrived.

The girl had chosen a glittery silver floor-length dress (which would have blended into her skin- she had one of those practically transparent complexions- in pictures if the glitter hadn’t caught the flash). Then they chose to grind it out (and sloppily make out- it was the first of such incidents for both of them) on the dance floor before getting their official dance pictures taken.

A week later, I walked up to this girl wailing over her dance pictures with her new boyfriend. Without a word, she passed the pictures to me.

It’s really recommended that, if do you choose to wear a dress with glitter, that you get your pictures first. Otherwise, you’ll end up with their situation. Remember how I said the glitter caught the camera flash?  Well, the guy had a large area of glitter on his suit. It was unfortunately all centered around his crotch, since they had made the unwise decision to dance before taking their pictures. 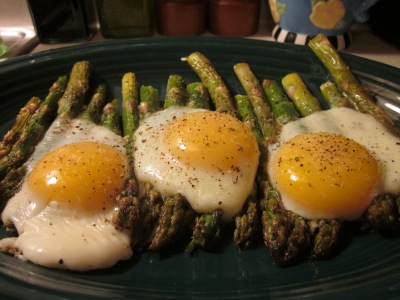 71 thoughts on “Revenge, Glitter, and Asparagus with Eggs”